There seems to be a strong impulse in human beings to leave their mark. To tell the world you were here. Unlike other animals we know we’re going to die and leaving some sort of physical mark behind  is one way of ensuring our symbolic survival. Of course animals mark their territories too with scent and claw marks, urine and faeces but there seems to be obvious long term intent beyond marking a territory or finding a mate. Perhaps these drives also play their part in our own activities.

These drawings  on the walls of the Chauvet-Pont-d’Arc cave  in southern France are  the earliest known and best preserved cave art that have been found. Dating back some 30,000 years these charcoal renderings are in many places covered by the claw marks of extinct cave bears. What motivated our ancestors to make these drawings.  No one knows. 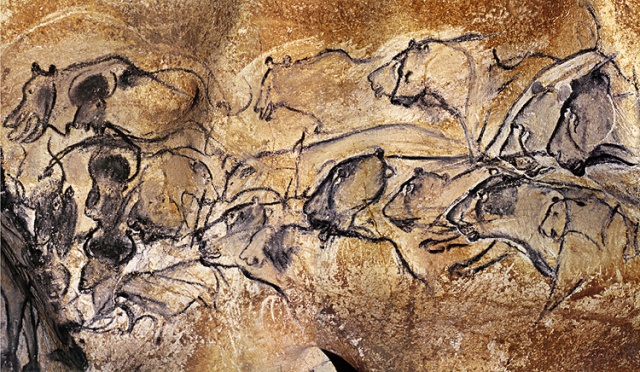 When humans moved out of their bear infested caves and into their first permanent dwellings some ten thousand years ago they started to decorate the interior walls with hanging paintings and wall painted frescos while  the exterior walls became canvases for graffiti. What is graffiti? The Oxford English dictionary defines it as ‘writing or drawings,scribbled,scratched or sprayed illicitly  on a wall or other surface in a public place.

In AD 79 the Italian city of Pompeii was covered in ash and mud during the eruption of nearby Mount Vesuvius. While this proved fatal for many of the inhabitants it preserved the city as an almost perfect time capsule. When the city was rediscovered in the eighteenth century subsequent excavations revealed that the outsides of many of the buildings were covered with drawings and text.

When I was growing up in the 1970’s the predominant sort of graffiti was done with spray cans. It was fast and easy to make your mark on a wall. Tagging hadn’t been ‘invented’ yet and the most common forms of graffiti were political satire, band names and gang related. Often it was pretty mindless. Just young drunken men with spray cans being vandals. Below is a fairly typical example from Dunedin in the early eighties. The first addition to this wall  was ‘Squash a Rasta a day’ with punk ‘anarchy’ symbols. This was followed by ‘Watch it Whitey Nigga Gonna Getcha…’before both slogans were painted over with ‘ANL’ – the acronym of the Anti-Nazi League. Ravens and ACDC (pointedly crossed out) are both band  names.

The inventor of spray paint in a can was paint salesman Edward Seymour in 1949 but perhaps the real credit should go to his wife, Bonnie, who apparently put the idea in his head. There were already other aerosol cans on the market but nobody had put paint in them before. Seymour  founded a company,  Seymour of Sycamore, Inc. of Chicago and him and Bonnie got rich!  Other manufacturers soon jumped in and now over 400 million cans a year are sold in the US alone.

Despite the rapid popularity of spray cans it took a while before artists saw their potential for painting outdoors. Traditional mural painters kept using their brushes and indeed quite a number still do.

If the spray can vandal is the city’s wicked witch then the fairy god mother just has  to be the professional mural artist.  A trained professional commissioned by a building owner or a community group to decorate their building. and often paid well to do so. Muralists have been around since the Roman Empire and probably longer and some,such as Mexico’s Diego Rivera,have  become famous. Many of them also had a gallery career to fall back on when they weren’t painting walls. This modern tromp oeil  ‘(literally ‘fool the eye’) mural by John Pugh  is in New Plymouth.

In the 1950’s and 60’s American street gangs started using spray cans to’mark out’ their territories. It only took a second to ‘represent the hood’ with a quick throw up whereas painting a gang slogan by hand took some time and incurred the risk of arrest. In the 1970’s some of this group of  disenfranchised urban youth saw the potential in spray cans to begin the colorful transformation of  their neighborhoods and a new style was born incorporating giant cryptic symbols and illustrated words painted on walls and on the subway trains which they rode every day.. In the beginning this style was called bombing. Now its called graf.  It’s still the style that many people associate with the ‘street art look’ and many young artists today cut their teeth and learn how to use spray paints putting up their tags or graf.

New York ,with its high population of young poor suburb dwellers became was the movement’s early focal point. This new style didn’t go unnoticed by some of the young artists living in the area.

Two of these in particular, Jean-Michel Basquiat and Keith Haring  are given a lot of credit for helping to lead the cross-over from graffiti to art. Both were inspired by the raw spirit of the new medium and began to paint on the street. Basquiat ( ‘street-name,Samo) specialized in simple iconography and long post-modern sentences mocking aspects of the establishment and the art scene in particular. Haring was more populist and used the walls of subways stations as pop-up galleries to showcase his quirky graphic stylings. Both artists took their street styles into the galleries and went on to major contemporary art careers before dying prematurely later in the decade. 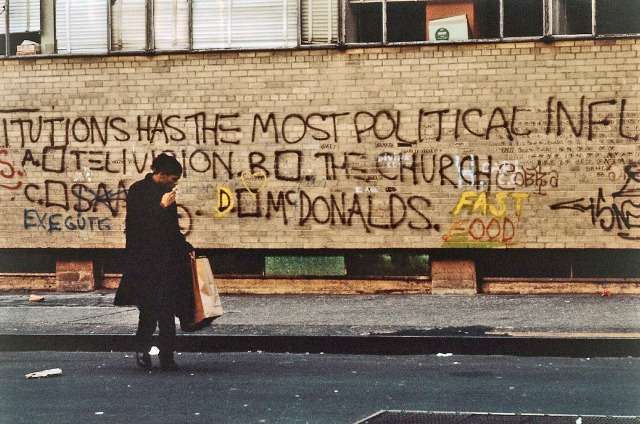 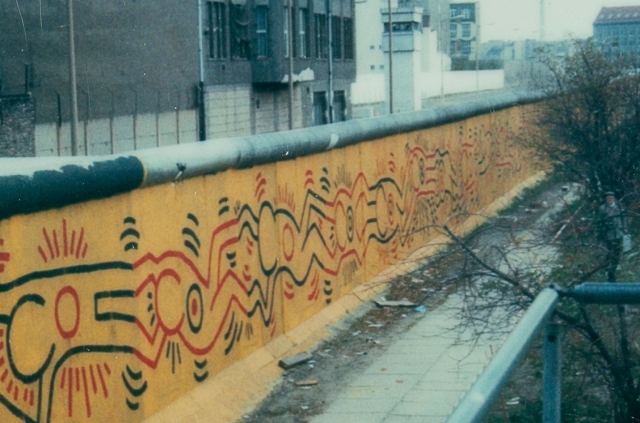 Keith Haring on the West German side of the Berlin Wall

Another artist who was influenced by what he saw in New York, particularly the life-size figures of Richard Hambleton, was Xavier Prou. Using the street-name of Blek Le Rat (‘rat’ as an anagram  for “art”)he returned to his native Paris and began to paint illegally on public buildings. So he could do this quickly and not get caught he pioneered the use of spraying through elaborate pre-cut stencils. Blek is widely given credit  as the ‘inventor’ of this technique which has since been used by many street artists including the ubiquitous, English artist, Banksy. Banksy  acknowledges his debt to Blek, not only for his use of pre-cut stencils but also for his early use of rats as a symbol of urban malaise and an inside-art joke.

“Every time I think I’ve painted something slightly original, I find out that Blek Le Rat has done it as well, only twenty years earlier.”(Statement credited to Banksy)

Whatever one thinks about Banksy he does have to be given  a lot of credit for catalyzing the new art movement via his clever publicity stunts such as painting on the  Isreal -Gaza barrier wall(2005), his coffee table books and his film, Exit through the Gift Shop(2010). The film is a virtual  street art how-to guide and as well as featuring Bansky it also catalogs some of the early activities of tile artist, Invader and paste-up artist, Shepherd Fairey.  But of course none of  these artists would have gone on to become famous without the invention and the widespread proliferation of the internet in the nineties and early twenty first century. By its very nature street art is temporary and is often covered over by other works or the building itself is modified or knocked down. A photograph on Instagram and the work is saved for ever(?)and available for viewing all over the world twenty four hours a day. Without the internet there would have been no mass movement on this scale and street art would never have been anything more than a strictly local phenomenon.

As street art took off spray can manufacturers such as Molotow and Montana brought our new colour ranges and nozzles adapted for different styles. Hire companies expanded their fleets of cherry pickers and scissor lifts and street art started to cover not just walls but whole buildings.  One of the world’s top big spray painting artists is Aryz from Madrid. Like many modern street artists he says he uses no stencils or grids to paint his giant colorful pieces all over the world. Like a rock star with a spray can he has joined an elite group of globe-trotting artists who travel the world going from one well-paid commission or street art festival to the next.

And its not just the men who are getting famous. Street art started out as mostly an illegal phenomenon where young men went out at night and painted or glued and hoped they didn’t get caught. Nowadays many cities have places where young people can practice their skills and more and more female artists are joining the movement such as Swoon, lady Aiko and Faith 47.

But street art is much more than just spray-painting. It embraces a whole range of new artistic movements who are expanding in all directions.

There is reverse graffiti where temporary or semi-permanent images are made by removing old paint or dust or grime. One expert in paint removal is Vhils from Portugal who removes old paint to create beautiful portraits.

There is paste-up – where posters or composite images are pasted onto walls using glue or wheat paste. Many are very temporary. People rip them off or they get covered over and without a photo on the internet their fleeting existence would go unrecorded. Two of the most well known are American,Shepherd Fairey, who became famous for covering the world in his OBEY posters and Frenchman JR who covers walls in giant photographic montages of local residents.

There is street sculpture – where sculptures or ready-made objects are installed with or without permission on walls or in public places.  Invader from France used tiles which he glues onto the unsuspecting walls of public spaces while Cityzen Kane from England uses large foam sculptures which he glues and/or bolts onto the wall. 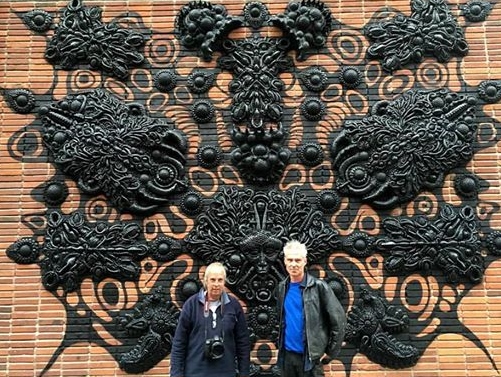 And then there are video projections, sticker art, yarn bombing, tromp oeil  chalk drawing and many other sub-sets and variants of those we have already mentioned.

Street Art has come of age. It is the new art movement. As potent and powerful as any of its predecessors. It is the child of the spray-can and the inter-net. And its not going away any time soon.

Occasionally, some of your visitors may see an advertisement here.

Tell me more | Dismiss this message

Bruce Mahalski is a Dunedin artist, known for his illustration, street murals, and sculpture incorporating animal bones. He is founder and director of the Dunedin Museum of Natural Mystery, a private museum of natural history and ethnographic objects and curios.
View all posts by artordeath →
This entry was posted in Art Teaching, Murals, Politics Art, Street Art and tagged Art, evolution, graf, graffiti, history, Murals, street, tagging. Bookmark the permalink.